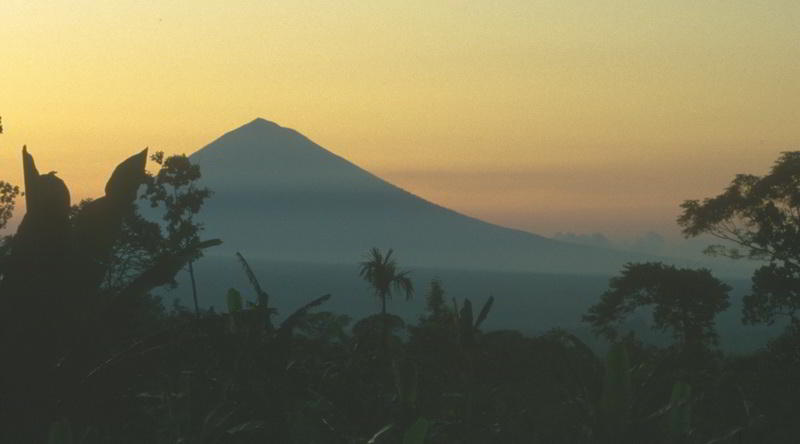 Gunung Agung, BaliIn the morning depart for Amed, on the eastern coast of Bali, where the ship will depart the next day. The transfer will take approximately 2.5 hours, and is a great opportunity to see a little bit of the island. You will visit Goa Lawah Cave and the water palace Tirtagangga. Arrive at the small hotel in the tiny coastal village in the shadow of mighty Gunung Agung volcano. Take your time and relax at the beach. Optional it is possible to snorkel at the reef near the beach. Overnight in Amed. 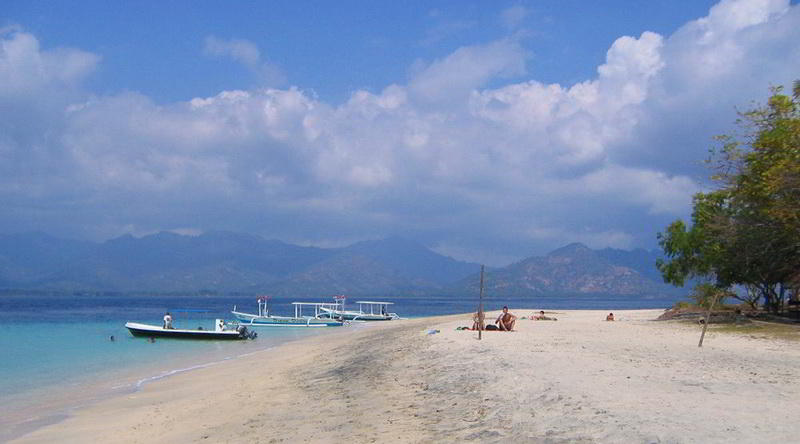 Gili Air BeachThe morning is free at your leisure. After boarding the vessel you will have a chance to settle in before the captain gives the orders for the anchor to be lifted prior to crossing the Lombok Strait. This deep trench of water between Bali and Lombok marks part of a very important ecological boundary, which was first described by the British naturalist Sir Alfred Russel Wallace. Wallace noticed that the flora and fauna of the islands to the west are home to Asian animal and plant species, whereas the islands to the east of the invisible "Wallace Line" have a greater similarity to species found in Australia. In the afternoon we will make our first stop at one of the three Gili islands, a popular holiday destination just off Lombok’s northwest coast. The boat will spend a few hours here. You can choose from a number of water activities: swimming, snorkeling, paddle boarding, kayaking or simply enjoying the beautiful white sandy beach. 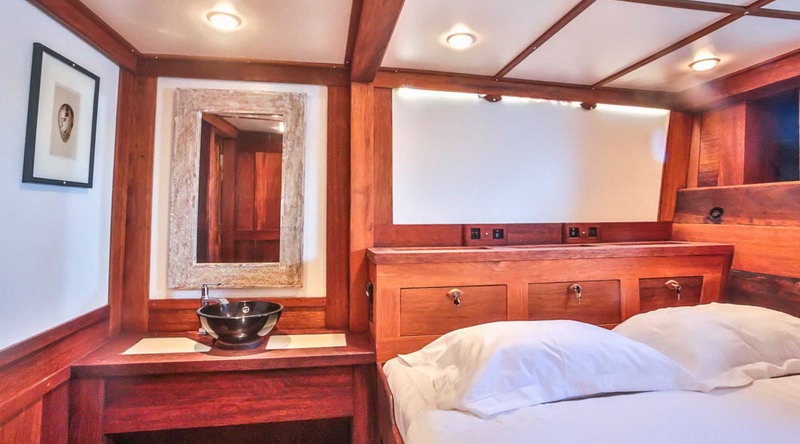 Ombak Putih CabinA hearty breakfast will be served in the morning. Afterwards start out for a day trip to the mainland of Lombok. Board a private bus for a drive to the traditional village of Senaru. One of the local female guides will take you on a tour to see the simple thatched houses and gardens of fruits and spices, which will give you an insight into the culture of the indigenous Sasak people. This mellow adventure will then lead down a well-trodden flight of steps through the tropical forest to Sindang Gila, a roaring 40m tiered waterfall. The small gravel beach and flat rocks at the base of the falls are a meeting place for the local people, and if you want you can take a dip under the full force of the intense flow. Continue with a walk alongside an old irrigation canal offering panoramic views of rice fields stretching towards the sea. The area around Senaru and Bayan was the birthplace of Lombok’s unique Wektu Telu belief system in which ancient animist practices are combined with Islam. If possible, visit Bayan Beleq, a grass-roofed mosque with woven bamboo walls. Said to have been founded in the 16th century, this is the oldest mosque in Lombok. Continue the trip with a visit some weavers and spinners demonstrating their age-old skills. After re-embarkation, explore one of the coral reefs near Gili Sulat, which is a marine conservation area. 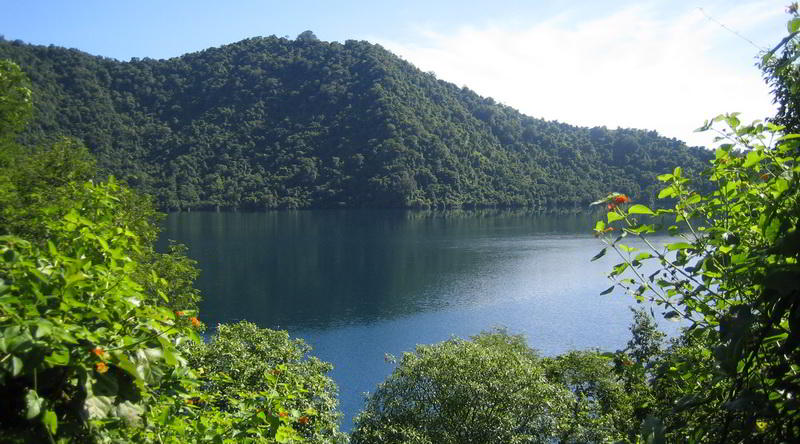 Satonda IslandThis morning, the phinisi will moor off the island of Sumbawa, where we hope to swim with a group of awe-inspiring whale sharks. The majestic animals are attracted by full fishing nets. Instead of driving the large animals away, the local fishermen invite visitors to swim with whale sharks from their fishing platforms. A mutual beneficial way to protect the rare animals. After this up-close encounter, the next stop will be Satonda, a strange and mystical volcanic island with a crater lake in its center. When Mt. Tambora erupted in 1815, causing a tsunami in the process, the crater on Satonda was filled with saltwater. The eruption was the biggest volcanic explosion in the collective memory of mankind; it had roughly four times the energy of the eruption of Krakatoa in 1883. 1815 is known as the ‘year without a summer’ because of the effect on North American and European weather. Local people believe Satonda to be magical. Keep that in mind when you climb up to the caldera to view the mysterious lake, alongside which are trees believed to be ‘wishing trees.’ Visitors to the island tie a small stone to a tree and make a wish. If your wish comes true, you are bound to return to the island to offer gratitude. The seas surrounding the island are rich with soft and hard corals and colorful tropical fish. You can spend the afternoon swimming and snorkeling. Another highlight of the visit to Satonda will be the sight of thousands of flying foxes that rise at dusk from the island to hunt on the mainland, returning before first light the next day. Immediately after sunset, the boat will leave for an overnight passage on a course due east. 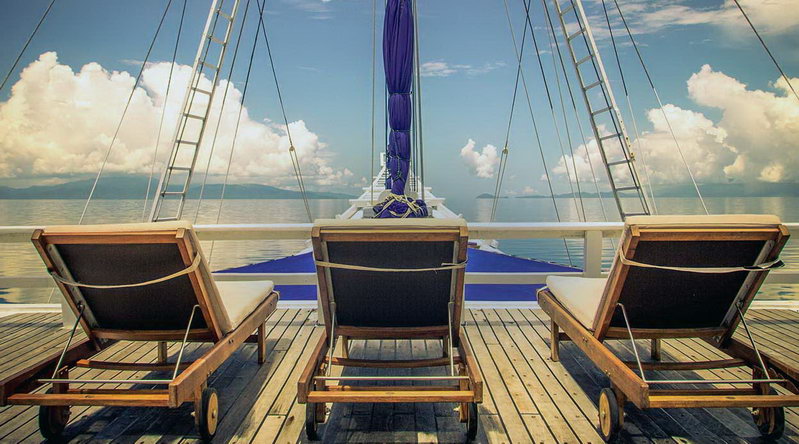 Ombak PutihWe will wake up off the coast of Pulau Sangean, an active volcano that towers 1,800 metres above sea level. After breakfast, we will go ashore to a small hamlet, which, because of the active nature of the volcano, is only inhabited for short periods during the year when the local people come to tend their crops and small herds of buffaloes, which we can see swimming in the sea. We will then snorkel on both a nearby reef and a location on the north of the island where volcanic gasses escape in the form of bubbles from the sea floor among the corals, a most interesting sight. We will then proceed to the island of Banta and its pure white sand beach, for an afternoon of swimming, snorkelling and hill climbing for the fit. Later that evening we proceed on to Komodo dragon country. 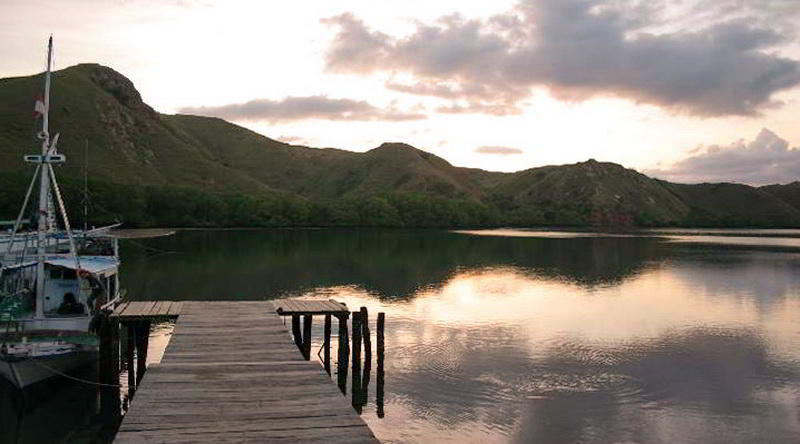 Kanawa Island, Komodo National ParkThe boat will anchor just off Komodo island in the morning. The Komodo National Park encompasses 80 islands. You will go ashore near the ranger station in Loh Liang for an early morning trek through the park searching for Komodo dragons. The animals are endemic to the islands of the national park. You will be accompanied by a local ranger at all times. The giant lizards roam free on the small islands. You will encounter them during your hike trough the dry, savannah-like landscape. You may also spot deer, wild boar, sulphur-crested cockatoos, butterflies, rare orchids and jungle chickens among the strangle-fig trees and the distinctive lontar palms. After returning to the boat continue the trip with a visit to Komodo village, where you can buy some local handicrafts. Later head to the gorgeous Pantai Merah also known as Pink Beach. It takes its name from the particles of red coral mingled with the sand. Relax at the beach or swim in the sea. 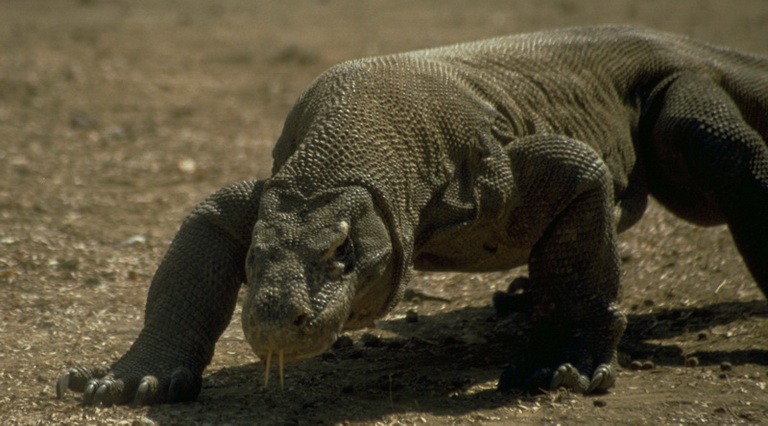 Komodo dragonAfter breakfast in Labuan Bajo harbor, leave the boat for a short visit to go for a second hike in search of the Komodo Dragons. Start today at the ranger station Loh Buaya on Rinca Island. The ranger will take you along one of the designated trails. Rinca is well-known for its diverse wildlife. You may spot monkeys, wild buffaloes, and deer. From the top of the hills, the scenery is breathtaking. In the afternoon, you can go snorkeling. The underwater world of the national park is rich with over 1,000 documented species of fish. Go ashore in the evening and enjoy a romantic bonfire at the beach. With your feet in the sand and the stars rising in the vast Indonesian sky, the crew will build prepare a beach barbecue as a final celebration of this memorable voyage.

After breakfast in Labuan Bajo harbor leave the boat for a short visit to the local market or take a private bus to the inland village of Melo. Here, local strongmen will perform a ritual whip-fight called Caci. Two groups of rival players, each armed with rattan shields and whips will try to hit each other while dancing to the rhythm of traditional acoustic instruments. The men of Western Flores are famous for this test of daring and skill, requiring lightning quick moves to dodge the infliction of a wound. The winner is loudly applauded and cheered by the village. The dancers will also perform other traditional dances. Afterwards return to the harbor and have lunch on the boat. Later transfer to the airport for flight back to Bali.

Own expenses
Additional services (marked 'optional' above)
Programme not mentioned above
Season Surcharges
Domestic flight between Bali and Flores.